Seoul has been the capital of Korea for more than 600 years since the Joseon Dynasty(1392-1910). It was referred to as " Hanyang" during the Joseon Dynasty, but after liberation from Japan in 1945, the newly founded Republic of Korea officially changed the name of its capital to Seoul. Today's Seoul is a bustling metropolis acting as the hub for political, economical, social and cultural matters. The Han river, which runs through the center of the city, divides Seoul into the culture and history oriented northern region'Gangbuk' and the business-oriented southern region "Gangnam". For more information on Seoul, Refer to VISIT SEOUL

Hansung University has an excellent location close to the historic and cultural hub of Capital city, Seoul. 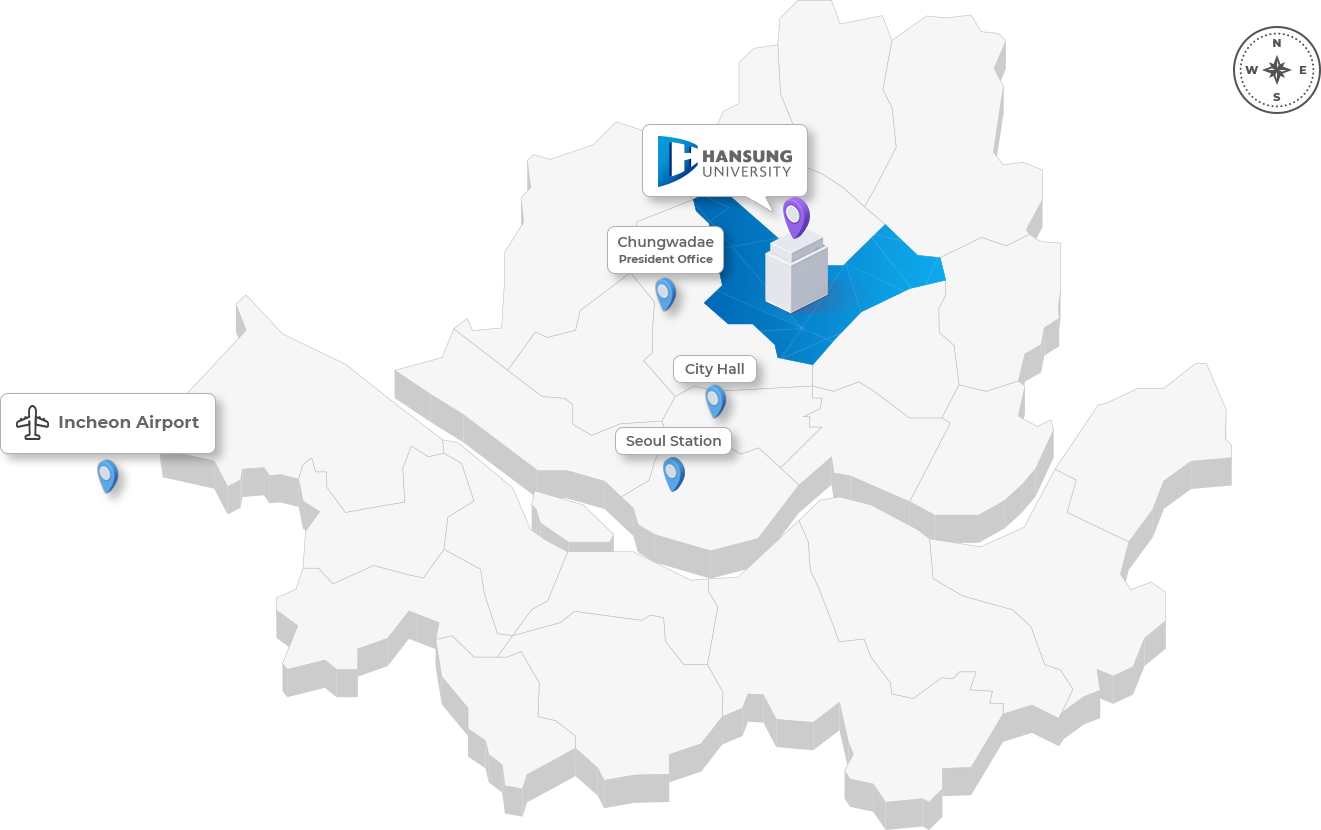 How to get to Hansung University from Incheon(ICN) International Airport

Right outside Arrival area of the Terminal 1(1st Fl), Transportation Center (B1 Floor) of Terminal 2,
You can see Airport limousine boading zone. Try to find stop for # 6011 bound for downtown Seoul. Bus will take you to Hansung University station approximately 50 mins after the departure. Bus fare is 10,000 KRW (9 USD)
Bus ticket should be purchased before boarding from ticket machines or ticket office.

Travel hour from Incheon Airport Station to Seoul Railway Station is 80 minutes. You should transfer to Seoul metro line 4( Blue) at Seoul railway station which is 13 minutes from Hansung University station. Train fare is 4,500 KRW (4 USD)

Taxi stands are located on the first level of the terminal. Standard taxi run by meters. Estimated fare of standard taxi to Hansung University campus from the airport is 60,000 KRW (55 USD). Passengers are responsible for the toll fee, 7,000 KRW (6 USD)

For more information on Public Transport from the Airport please visit ICN Hompage.

We provide free airport pick-up for Exchange students. Fee-paying students can use airport pick-up at the cost of 50,000 KRW (45 USD). Pick-up for early arrival or late arrival will not be available.
On official departure date, transportation from the dorm to the airport is available to all students.
TOP